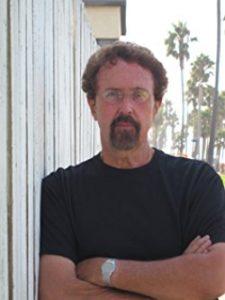 Timothy Hallinan is the award-winning author of twenty highly praised novels. He currently writes two series: the Poke Rafferty Bangkok Thrillers, focused on a Thailand-based American travel writer and his cross-cultural family, the fourth volume of which, The Queen of Patpong, was nominated for the Edgar award; and the Junior Bender Mysteries, about a Los Angeles burglar who moonlights, usually reluctantly, as a private eye for crooks. The Junior Bender series is under development for global cable television and the fourth book in the series, Herbie’s Game, won the 2015 Lefty as Best Humorous Crime Novel. The latest Rafferty book, The Hot Countries, was named one of the best books of 2015 by Library Journal and The Strand Magazine and was nominated for the Macavity award.

In addition to the Lefty, the Edgar, and the Macavity, Hallinan’s books have been nominated for the Shamus and Nero awards.

His most recent Junior Bender book, the Christmas 2016 release Fields Where They Lay, was an editor’s pick at Entertainment Weekly and at Publishers Weekly, and reviewers drew comparisons with such diverse writers as Arthur Conan Doyle and Donald M. Westlake. His twentieth book, Fools’ River, the eighth in the Bangkok series, will be published by Soho/Random House in October of this year.

In May of this year he’ll release his first self-published novel since 2011, Pulped, which uses Simeon Grist, the private-eye hero of his six-book series in the 1990s, to explore what a fictional detective does when he discovers that the life he thought he’s been leaving is actually the product of someone else’s imagination.

Hallinan has homes in Santa Monica, California, and Bangkok, Thailand. He is fortunate enough to be married to Munyin Choy.

The Long Goodbye by Raymond Chandler was mentioned by Tim as a book that influenced him to become a writer.
Tim is published by Soho Press (Penguin Random House’s crime press).
Finishing Your Novel – Tim’s six-part series (offered for free on his website) for writers on how to finish your novel. I highly recommend it!