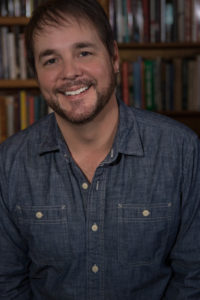 Michael Lister grew up in a small town in North Florida near the Gulf of Mexico and the Apalachicola River.

Captivated by story since childhood, Michael has a love for language and narrative inspired by the Southern storytelling tradition that captured his imagination and became such a source of meaning and inspiration. He holds undergraduate and graduate degrees in theology with an emphasis on myth and narrative.

In the early 90s, Michael became the youngest chaplain within the Florida Department of Corrections. For nearly a decade, he served as a contract, staff, then senior chaplain at three different facilities in the Panhandle of Florida—a unique experience that led to his first novel, 1997’s critically acclaimed, Power in the Blood

which became the first book in his bestselling and long-running John Jordan mystery series (19 novels published so far).

In this interview, we talk about his fascinating background working as a prison chaplain, what inspired him to write, the challenges of writing a popular long-running series like his John Jordan series and a lot more!

Writing influences: Watching the Spencer for Hire television show led to discover Robert B. Parker. Michael Connelly, James Lee Burke, Graham Greene, and others.
John Jordan merch.
Great book trailer videos, a video of his interview with Michael Connelly and more can be found on his website.